I always thought the Blades family lit up The Stair-they were great fun and always seemed to be very go-ahead. One of their innovations was writing to pen-pals in the United States, which must have gone beyond just writing, but actually meeting up. On Saturday, 5 August, 1972 Liz introduced me to her American pen-pal, Lisa. They soon had me doing the same and introduced me to a girl called Peggy Burbank from New York; over the next year or two I was exchanging letters with her. 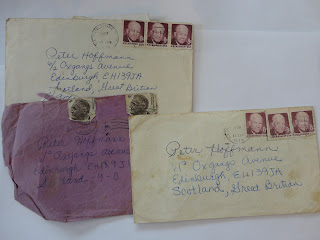 Receiving letters through the post was a thrill, particularly with the foreign stamps. These were the days before mobile phones were even a dream, never mind the internet, Twitter, Facebook or blogging.

On balance the world's much better for the improvement and speed of communication. Waiting on tenterhooks for the postman to drop a letter through the door from a girlfriend or boyfriend was a wonderful thrill-however if it didn't arrive one had to wait a whole twenty four hours; it was agony and one had to be patient and endure.

Writing a letter did mean that one was perhaps a little more considered and there was a delay before the finality of posting the letter through the post box down from Dr Motley's surgery. And, because there wouldn't be an uplift until the following morning one could delay sending the missive. Today it's too easy and immediate to press the send button or the publish button on the blog. Even now I feel that slight hesitation-what are the ramifications?

Whilst in the short term the immediacy of communication is wonderful, in the long view having letters from forty years ago opens a window on the past-people can speak to you from beyond the grave, so to speak. 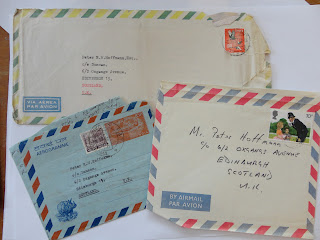 My father Ken Hoffmann was a wonderful letter writer. My grandmother was always encouraging him to write about his adventures across the seven seas. He wrote to me from America, Japan, China, Australia, Argentina and Romania to name a few.

And, as the saying goes, When I was sixteen I thought my father knew nothing; by the age of twenty one (or fifty six) I was surprised at how much the old man had learned!
Posted by Peter Hoffmann at 19.12.12

Its a shame that your comments strip came undone Peter. I just wanted to let you know that it was thanks to my mother that we had these pen-friends. She had corresponded with friends in the US before the war. I'm not sure how that came about. Anyway the family offered to have her to stay once WW2 was declared but her parents were fearful something might happen on the Atlantic crossing and she never made it. I think she always regretted that she had been denied that opportunity.
It was she who wrote to churches in the US - I have no idea where she got the contacts - asking for pen-friends for me. My two main contacts were Lisa in Los Angeles who I visited a couple of times, and Jeanetter in Cincinatti who I also visited a couple of times.
Sadly Lisa died in 1997 (just before Princess Diana). She was an alcoholic and the alcohol abuse had taken its toll and destroyed her liver. Absolutely tragic because she had been the quintessential Californian beauty, bronzed, slim, with long blonde hair. She was also the most gentle and kind person I ever knew. She was only 41 yrs old when she passed away.But if it hadn't been for my mother's efforts I would not have known her at all.