Further Shops At The Broadway And The Crescent And Colinton Mains

'Every day, I walk up the high street to work, and as I pass those little shops, a nice, friendly, warm atmosphere seems to come wafting out...' Sergeant Wilson, Dad's Army

The shops not thus far covered in the blog which were important parts of the lives of those who lived at The Stair included three butchers shops; a fruit and vegetable shop; Allans Grocery; Campbells Newsagents; and Cruickshanks Grocery. 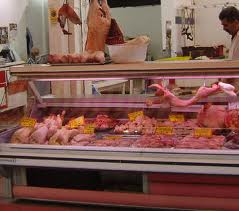 The butcher's shop at The Broadway was a well run clean shop which was above the average. It was owned by Crombie Smith.

My memory may be playing tricks but I think it was here that Iain Hoffmann and Boo-Boo Hanlon began work as apprentice butchers.

Les and Iain went on to work and have adventures at Leslies Butcher's shop at Comiston Road just around the corner from Bairds newsagents shop. The shop remained there for many decades. They had many adventures there which I'm sure they'd happily tell you about. I think what eventually drove Les from the shop was that he used to panic when serving customers because he found it difficult to work out the change when he was serving customers! Only Boo-Boo stayed with this trade as a career. 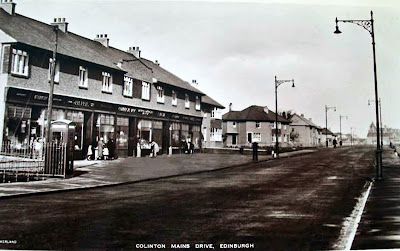 Neil's Butcher's shop at Colinton Mains was there for many decades too - again it was a relatively high class shop for the area. It was his brother, Dr Neil who opened the lovely garden at Duddingston Village to the public. 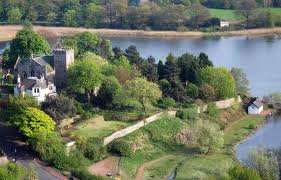 Both brothers died in fairly recent years. However, if we ever had to visit a butcher then it was at The Store - this would be for Ayrshire Middle bacon - also for a quarter pound of chopped pork which made my stomach turn! Meanwhile, the butcher's shop at The Crescent was Warner's. I was never in this shop.

There was an old fashioned fruit and vegetable shop - Holmes - at The Broadway. It remained there for decades and must have been one of the original shops - it always had that particular smell unique to such shops. These shops have mostly disappeared although there is still one in Dingwall. When we lived at Colinton for seven very happy years between 1989 and 1996 there was a similar fruiterer's shop in Colinton Village. I visited it because it took me back to The Broadway. 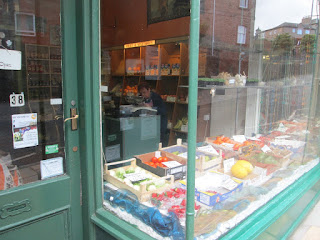 Even then I thought it must close down, but it's kept soldiering away with the same lady owner, Patsy Downes, who never seemed to change in appearance - she had the look of a gypsy with dyed black hair. A few years ago we took a family walk from the flat at Gillsland Park up though Colinton Dell and stopped off in the village for coffee and cakes - well blow me down it was still on the go - it was like walking through a time-warp - it's surely gone to the great shop cemetery in the sky? (It's not as of 2018!) 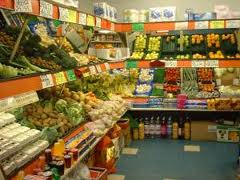 A Mr McNish ran a little wool shop both at Oxgangs Broadway and Colinton Mains and at a later date  also took on the post office in both locations too.

He must have realised that in the years ahead it would be difficult to earn a living for his family from selling wool, cotton reels and items of school uniform - does anyone remember the snake Hunters Tryst school belts as well as the school tie and badge? When the opportunities arose for both Post Office franchises he must have seized the moment. 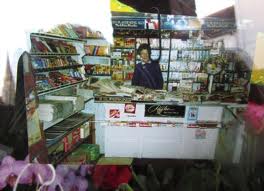 He wasn't a very popular chap - serious and pinched, he didn't have the easy personal skills that made for a good shopkeeper. Even I would notice this as a wee boy when I was collecting the Family Allowance - the magical money that my mother received every fortnight. I believe the McNish family stayed at Greenbank. His would have been another of these tales of entrepreneurship at The Broadway now probably sadly vanished and untold - we need a social historian going avisiting with a tape recorder!

Allans the grocers I've alluded to when remembering Helen Blades. Was it two sisters and a brother who ran the shop? A friend of Liz Blades married the son of one of the Allans - also Douglas Blades worked there as a bicycle delivery boy. The Hoffmanns didn't give any trade to this shop; instead we got the vast amount of our provisions at The Store. Also, it was quite expensive at Allans - being able to sell wines and spirits must have helped the business survive over the period 1958 to 1972. The Blades seemed to be the only family from the The Stair who regularly shopped there.

The two shops which I visited regularly at The Crescent were Campbells Newsagents and Cruickshanks Store. The Campbell family must have led a similarly good life to the Ewart's at The Broadway. They had a monopoly in that part of Oxgangs and Firhill. The shop always seemed to me scruffier compared to Ewart's and although it too sold confectionery wasn't so well organised; unlike Ewart's it didn't have the jars of penny sweets lined up in military precision. Like Ewart's it sold rolls on a Sunday - buying in the dozen rolls and the Sunday Post sometimes took me in this direction. As I said I found old man Campbell a wee bit gruff, but humorous.

My main visits to The Crescent were to Cruikshank's which in essence was a baker's, but really a small grocer's and sweet shop.

For such a small shop unit they seemed to have found the magic formula.

A bakery of  sorts and also a grocer's of sorts, but selling a limited amount of products, but what it had hit upon were the sweets, chocolate and juice that kids liked.

We were able to buy Koolapop here - a brand of fizzy juice that I've never been able to come across since. It's a brand that has vanished off the planet. I don't know who manufactured it. It came in a bottle larger than a Coca Cola bottle, but only the top part of the glass had that novel twist. It had a screw top, but not metal - instead it was akin to a rubber cork that screwed into the bottle. The taste wasn't as strong as Coke. The bottle was the perfect size to wash down our Paris buns or pies from the shop and also slaked your thirst.

Returning the bottle meant one got threepence old money back, thus it really cost one shilling and threepence. Everything was piled high in Cruikshank's making the most of very limited space - even the jars of sweets at the front counter meant it was difficult to see over. 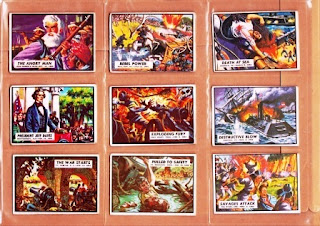 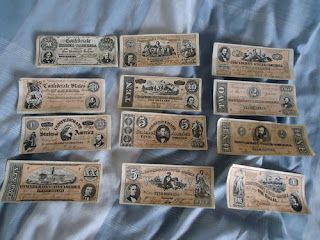 They also sold the popular ABC cards and gum - many footballers series which the boys enjoyed swapping; they also sold The Beatles and The Monkees cards as well as the American Civil War. They were clearly a good example of a business which worked back from the market and provided and satisfied a need with a rapid turnover. 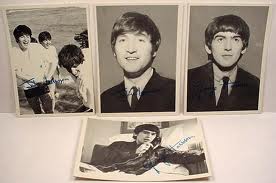 One other shop which we visited at Colinton Mains and was similar to Cruikshanks was a grocer's shop called Andretti's; it also sold rolls and we visited it for many years. Mrs Andretti was a lovely woman. For those who remember the shop, they will also remember that it closed down for tragic reasons. The son of the owners was disturbed and murdered a little girl in the neighbourhood and hid her small body in the flat above the shop. The Andrettis found it impossible to run the shop into the future, although I think they tried to.

As I've said on more than one occasion I believe that a social history of the original shopkeepers at The Broadway; The Crescent; and Colinton Mains who were pioneers in the first decade or so of the new housing schemes which arose at Oxgangs after the Second World War would have made a very interesting book. All parties benefited - the residents at Oxgangs were provided with a service; some local employment was created; and the owners made a living for their own families through their brave entrepreneurship.
Posted by Peter Hoffmann at 27.12.12

My Nana Aitken, who lived at 60 Colinton Mains Road, worked at the cake shop? in Colinton Mains for many years, she was incredibly fast at counting up the items being bought, she was way faster than a calculator.

a regular routine of my childhood was being told by my mum that
i could have 3d worth of sweets from Cruikshanks.
What do you want ?
Just get me thruppence worth of rubbish !