The Field In Winter and the Last of the Mohicans 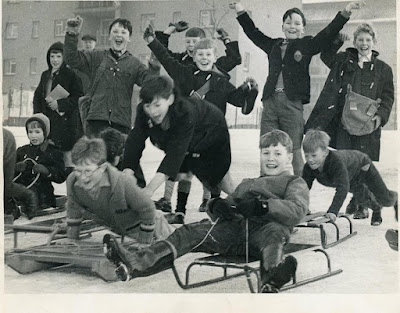 I've alluded to The Field on several occasions over the months.

It served all the kids at The Stair well as a playground over the four seasons of the year.

And although we at the four stairs at 2, 4, 6 and 8 Oxgangs Avenue saw it as our personal fiefdom it actually also represented a neutral point in the community which drew in others from Oxgangs Street and also across Oxgangs Road North including children and teenagers from Oxgangs Farm Drive.

In the main this was to play football - occasionally someone would fly a kite and for one summer we actually played some cricket!

This was courtesy of Norman Stewart who had received the cricket set from his grandparents for a birthday.

It was actually good fun.

For Norman it was a game he could play and compete on a level playing ground so to speak as he didn't play much football. 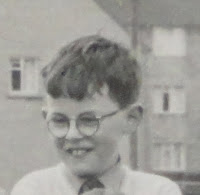 These were all mainly boys orientated, but the one game which was gender neutral and all the better for it was the games of rounders that both girls and boys participated in. Rounders were great fun and normally no team was in for too long which kept the interest going.

From around 1966 onwards the annual bonfires that used to be held in the wee field directly out the back of The Stair were deemed by the Fire Brigade and Edinburgh Corporation as being far too close to us all as it indeed they were; certainly the Blades, the Hoggs and the Hoffmanns didn't need a fire on bonfire night such was the heat that emanated toward the Stair. At least the Swansons, the Stewarts and the Smiths were on the wrong or should that be the right side of the bonfire; whereas the Duffys and the Hanlons were a bit safer on the top landing.

Where the field really came alive however was when the snows of winter came. It was then that The Field truly came into its own.


The ground may have been frozen hard as iron and to all extents dead, but it was alive with children and young people both girls and boys.

What a sight it was to behold - a carpet of white adorned with well wrapped up stick like figures, some quite colourful, but more likely inside the dark blue nylon anoraks or duffel coats that many of us wore at that time, starkly contrasted against the landscape, black on white, the scenario was straight out of a Lowrie painting.

And then when dusk came and the night fell and the street-lights on Oxgangs Road North slowly began to flicker on and the dancing headlamps of the cars and buses carrying the workers home, watchers by the threshold could catch happy flitting figures dancing across the white landscape of The Field. 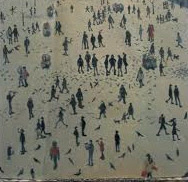 Dozens of sledges of different sizes would come down the hill.

The more adventurous ones had polished up the runners so that the sledge flew; others were much more apprehensive and went down with their feet hanging over either side. The more daring would aim to both extend the length of the run by skilfully manoeuvring through the gap in the fence and fly into the drying green; some were even full hardy enough to fly over the steps too coming down to rest adjacent to our back garden at 6/2!

As mentioned on a profile of Douglas Blades the Blades family enjoyed using the big sledge that Mr George Hogg had built; and Norman Stewart had the classiest sledge in the district The Flying Dutchman. 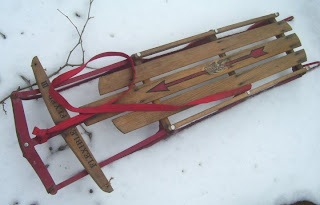 Gavin and Heather Swanson had sledges but were quite conservative on the slope.

The Ramage twins, Les and Derek from 4/3 had nice light sledges.

I don't recall the Hanlons having sledges.

The Hoffmanns didn't have sledges, although Iain may have used an old beer tray that our father, Mr Ken Hoffmann possibly brought home from a pub, but essentially we never owned a sledge so we became boarders instead - not always popular with many sledgers because we would await for a passing sledge to come by and then try to run alongside and dive on board it; those individuals who were lying on their stomach on the sledge were particularly prone to being dived upon or sat upon.

Of course we were not always successful and often ended up missing the sledge or falling off or indeed bringing the owner off too - still great fun ending up rolling in the snow!

We'd play outside for hours until we became too cold, too wet or we were called in and then we'd head for home chittering as our mothers pulled off our wet clothes that had stuck to our backs and we'd hop around as we encouraged others to pull off our Wellington boots. The drying cupboard in the sitting room would be chock-full of clothes and our Wellington boots would be lined up like soldiers in front of the coal fire to dry out

Just before coming in we'd have made sure we'd taken part in one of the other fun rituals of playing at The Field - throwing snowballs at the slow moving vehicles going up the gauntlet of Oxgangs Road North.

We mainly chose the buses as they were large slow moving targets with as many as a dozen of us lined up and at a given call an array of snowballs would be fired at the bus windows.

It must have pissed the passengers off no end - it was like medieval warfare in the dark midwinter as many as twenty snowballs flew through the air and bombarded and thudded against the windows of the bus. 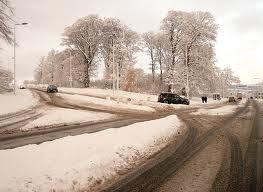 Once home and inside and later into the evening I would occasionally glance out from our living room window and look out to The Field.

It had become quieter; numbers had dwindled as children made their weary way home, until there might be only a solitary figure left, sledging downhill; of a sudden the last sledge run would take place and The Field became eerily silent.

Today The Field remains in winter, but winter throughout the spring, summer and autumn seasons of the year too.

The only figures there are the trees which were planted many decades ago and somehow thrived and of course the ghosts of the Hanlons; the Duffys; the Blades'; the Hoggs; Norman Stewart; the Swansons; and the Hoffmanns and all the hundreds of other children from all those decades ago.

I wonder what child was the very last sledger? 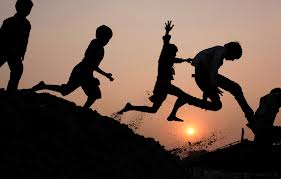 I think I remember those winters and the sledding more so than the summer. Maybe because the snow made things seem pristine, new, and fresh. It made things sparkle - a pleasant change from the dull concrete jungle that was Oxgangs.

I remember the treacherous ice slides on the pavements and the hard packed snow on the field. It was exhilerating flying down the hill on a sled. I remember using a light low sled, basically a flat 'bed' to lie or sit on with 2 short wooden runners attached. I don't think this was the sled Mr Hogg made, which I don't remember, but thinking back it seemed similarly home-made.

Anyway I was about 9 or 10 yrs and I wanted to emulate the older lads who ran with the sled and launched themselves to lie on it in motion. I unfortunately allowed the rope to trail under the sled as I ran forwards and trod on it just as I launched myself. Of course the sled stopped sharply as I continued going! As you said the hard packed snow was iron hard and my face bore the brunt, severely damaging my front teeth and taking off a layer of skin (ice burn). It was so cold I didn't feel much and felt more foolish than anything but the next day my face was a mess!I think I had a dermabrasion long before we knew what that was!

As for the trees, my how they have grown. I remember those spindly sapplings which seemed to forever require propping up. But they made it to maturity forming a copse there on the hill. I wonder if we would still be able to see the No 16 bus coming down the hill?!

On an earlier topic you mentioned leaving Oxgangs in 1972 which I did also although I think it was earlier in the year. I may have been the first to go. I moved into a share house, a beautiful ground floor garden flat in the new town. I worked in Charlotte Square and so I used to walk to and from work, and later that year I went to Philadelphia in the US to work as a 'mother's help'. Now in Australia since 1988, I wonder if I am the former resident now most removed geographically from the stair?

You mentioned Gavin Allen in a post I read earlier - not sure of the chronological order. Thinking about the snow on the field (us Colinton Mains kids used to take our sledges up there too), I recall one of Gav's younger sisters smashing her sledge into the wall at the bottom of the field and breaking both her legs. I can't remember her name but I know it wasn't Georgina as she was in my year at St Mark's. I do remember the poor wee thing turning up for mass at St Mark's church with her legs wrapped in a couple of barely manageable stukies though.