On Saturday 15 July, 1972, five of us set off for a camping holiday to Stobo, Peebleshire. The five were Alison Blades; Fiona Blades; Paul Forbes; Iain Hoffmann; and me. We got a lift down there from Douglas Blades in his red Austin pick-up. 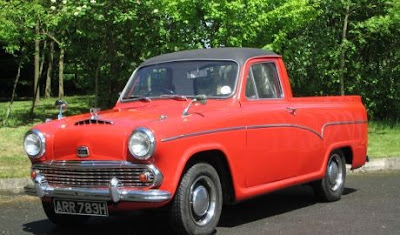 Douglas's van could only seat two passengers in the cabin, so Alison and Fiona sat inside. Paul, Iain and I meanwhile sat in the back with all the camping gear and luggage; we were completely open and exposed to the elements, although fortunately the weather was set fair. It was a great feeling sitting in the back of the pick-up with the rushing breeze blowing our hair back. We felt cool, metaphorically and then literally, as the journey progressed through the wynding, open roads of the Borders. After we travelled through Penicuik we passed Leadburn Junction and made our way to Eddlestone where we turned right for the drive over the gentle Meldon Hills and then on through old Lyne Station, Stobo Castle, Stobo Kirk and the tiny hamlet of Stobo.

To keep sheltered from the wind we had to snuggle up together and kept as low down in the vehicle as possible. Fortunately we didn't come across any policemen en-route-although it was a laxer age, they might well have stopped us if they'd seen us sitting in the back of an open vehicle.

Stobo is a sylvan spot in Peebleshire set amongst the gentle and beautiful Borders landscape. It's little known unless you are perhaps familiar with the early works of John Buchan. Forty years before James Patrick McIntosh, the great Dundee artist painted a well known painting of the kirk; the painting is in the collection of Edinburgh's City Art Centre. Today, Stobo is a little better known because of the exclusive health spa at Stobo Castle.

We had managed to borrow a large tent from the church - I think it belonged to Oxgangs Evangelical Church rather than Charlotte Chapel - I note from my diary that it was Fiona who got it for us. I had borrowed a sleeping bag from my grandparents and bought in lots of food from The Store, including a few flagons of cider - looking back it seems amazing that teenagers could buy alchohol and tobacco so easily.


The farmer gave us the go ahead to camp in his field. I note from my diary that after setting up the tent that evening (with a hand from Douglas) we thereafter managed a swim in the River Tweed followed by a good supper washed down with cider - a deadly combination! According to the diary we were tipsy - a rather quaint word. Paul had clearly consumed too much and was sick. I recall him swearing that he'd seen a shooting star during the night, but we were dubious, much to his dismay.

Normally the problem with camping in Scotland is the weather - people often get washed out and have to give up and go home. Ironically, we had some difficulty with the weather too, but for the opposite reason. We chose one of those very rare occasions when Scotland had a heatwave!

The week we'd chosen to go camping was the hottest of the summer. In the following days the temperature was mostly in the eighties. Indeed it was so hot that most of us began to suffer from heatstroke. By the following Tuesday our grandparents were good enough to drive down to take Alison and Iain back home to The Stair to recover. The group photograph shows how badly Alison was suffering. Again, from my diary I noticed that I too was sick that evening, noting that I was feeling crap!


However, in between, we had a lovely time. We were up early with the light and stayed up late into the evening sitting around our camp-fire. Sometimes we'd cook a fish that had been gifted to us by local fishermen during the day. The bus-driver on the Peebles to Glasgow late night bus used to flash his lights at the happy young campers as he drove the country bus along the old B712 road. From the spring through to the summer we'd all enjoyed occasional card games back at The Stair, so before turning in for the evening we sat and played games of trumps. Before we all drifted off to sleep inside the tent, the craic was always good with much story telling, nonsense and hilarity. We'd be awoken in the morning by the sounds of birdsong. The only sound during the night was the gentle plashing of water as it lapped against the small pebbles, but once or twice during the night there might be a strange sound or screech which broke the silence - What was that? (or if it was Paul What the fuck was that!) was the usual refrain from one of us, but we felt safe and secure in one another's company and soon fell back to sleep.

During the day we used to spend a great deal of time in the River Tweed. It was a glorious spot. Adjacent to our tent was a small still pool which kept our submerged drinks cool and which we also used for bathing. We used the opposite side of the bank, which was a good four or five feet higher up for diving into the main body of the river. Here the water was around eight feet deep. It was wonderful to begin the day with a dive into the pure clean water. Throughout the day, whenever we sizzled with the heat, we'd stroll across and dive and dive again into the water.

On most days a few families came for picnics and were often friendly. Entertained by our exploits they were often kind offering us some of their food. Half a mile away there was a tiny wee shop in the little hamlet of Stobo. Paul and I usually wandered down early each morning to pick up a pint of milk, some bread and lemonade or coke to keep the fluids up.

The lovely county town of Peebles was six miles away. On one occasion Paul and I began walking there but it was terribly hot and exhausting. We stuck our thumbs out to a couple of passing vehicles but without any success. Being a quiet country lane there was very little traffic on the road. Of a sudden we heard a car in the distance. I immediately lay down on the road whilst Paul leapt up and down and waved down an older, charming English couple and told them rather dramatically that I'd fainted with the heat. They kindly offered us a lift into town. Rather like Stanley Baxter in The Fast Lady I of course made an immediate recovery and we were soon conversing happily with them on the drive into town! 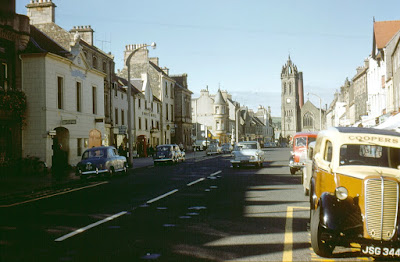 Peebles for pleasure runs the old motto and we sauntered around enjoying games of putting and of all things playing with swans down by the River Tweed. I assume we got a country bus back to Stobo as I suspect walking the six miles back to our camp-site would have been beyond us. Fiona, Paul and I stayed on for the rest of the week. We gathered firewood from the local wood, swam, conversed, played cards and generally lapped up the sun and the experience, before Douglas kindly came down to collect us and drive us back to The Stair.

When that summer of 1972 came to an end it marked a point in time - a line in the sand - the bell was ringing for the last lap and the end of my boyhood. It wasn't long afterwards, indeed only a few weeks later that I decided to leave school. A few months later, at the start of winter I left The Stair, only to return for occasional visits.

I have tidings for you,
The stag bells;
Winter pours;
Summer has gone

Wind is high and cold;
The sun is low;
Its course is short;
The sea runs strongly…

Cold has seized
The wings of birds;
Season of ice.
These are my tidings