Milk; Fags And The NHS

Over the years to make money I had many paper rounds and also delivered milk. However, I always considered myself to be more of a paper boy, than a milk boy. You tended however to make more money as a milk boy and also received better tips. And if one was on a milk float it was better fun-less solitary because one was in company.

That said, I had a number of milk rounds over the years, including working for Douglas Blades, more of which in a future blog. At times I worked for a small dairy shop at Boroughmuirhead, Bruntsfield and also Berry's Dairy at Falcon Road West. These shops were there for decades and were family businesses. For delivering the milk I had a two wheel metal barrow. It was a solid, heavy old thing; Sean Connery had probably used the same one back in 1940!

On weekdays there were four to five crates of milk to deliver; on the Saturday there was an extra crate which also accommodated some cream and butter. My round encompassed the old tenement flats around ’s Dairy job covered 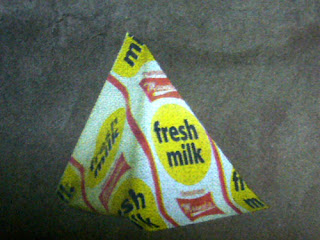 What was better fun was working for Edinburgh&Dumfrieshire Dairies on their battery powered three wheeled vehicles. These were open sided, to allow the milk boys-usually three of us, to hop on and off the vehicle, with our little four or eight pint carriers. We’d dart in and out of the Morningside houses collecting the empties and replacing them with gleaming full bottles of milk. Up until then I presumed all that one could buy was silver top milk; however, some of these fancy houses received red top and also gold top-the latter, being milk.

This work was more fun because one was in the company of others, rather than being on your lonesome. That said, on icy cold mornings my hands would get painfully cold, almost reducing me to tears. What was deadlier however was going down the incredibly steep with its right angle turn into I always thought the vehicle was going to over-turn; especially when the roads were covered in ice. To counteract the threat of this happening, all the boys had to stand on the driver’s side or else vacate the vehicle.

A good friend who worked regularly for the Dummy was Geoff Hunter.He lived at Oxgangs Farm Avenue. I worked on and off at different times with him-often after he had inveigled me away from the loneliness of the long distance paper-boy!

I haven't seen Geoff for almost forty years. He was a nice lad-a very able student in our class at Hunters Tryst School where he was never out of the top three and who went on to Boroughmuir Secondary School too. I hung about with him on and off over the years. We scived off school together-being in different classes at the Junior School we had to fabricate headaches and temperatures at the same time! On another occasion we scived off school to go the Radio 1 Roadshow in Princes Street Gardens; we'd visit the Pit Stop Cafe at Chesser where my grandfather footed the bill for our bacon rolls and orange juice; we played table tennis together at the after school club; and also attended Boys Brigade together at Barclay Church, Bruntsfield each Friday evening retiring with others afterwards to Demarcos Cafe at Tollcross to enjoy their fabulous coke floats and hamburger rolls. Geoff was a smoker and got me into the fags too for a few months. Today he's Head of Personnel at NHS Edinburgh and is still a talented table tennis player and goalkeeper.
Posted by Peter Hoffmann at 20.12.12