In the week that it was announced that The Dandy will only be available in a digital version. were our generation the last to enjoy decent comics? 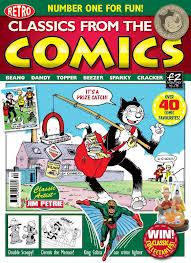 Today, there’s not a decent one on the market; the most recent being Classics from the Comics which were mainly reprints from the 1950s and 1960s. The comics which members of The Stair enjoyed during our childhood and youth in the 1960s were brilliant-a golden age of comics.

They were so good that I was still subscribing to the Hornet; the Hotspur; and the Victor in my late teens. Late in the afternoon I recall my grandfather and I laughing away, as we jostled one another in the hall as we raced each other, having heard the thud in the front doorway which signalled that the paper boy had delivered the Hotspur on a Wednesday! Happy days!

Two athletics stories particularly inspired me and thousands of other boys too. The characters' names were Wilson and Alf Tupper aka The Tough of the Track. 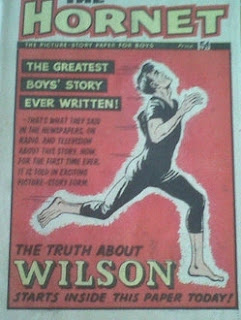 was a truly extra-ordinary character-a mysterious loner who lived a Spartan life on the remote Yorkshire Moors. Perhaps it was this solitariness which drew me to him. He was almost two hundred years old, but looked about thirty five; he lived on berries and water which he drank from the pure mountain streams. Rather than shorts and vest, he wore an all in one black suit, rather like a male ballet dancer might wear for training. It looked a bit like the lycra suits that some sprinters wear today, so in that respect he was ahead of his time. 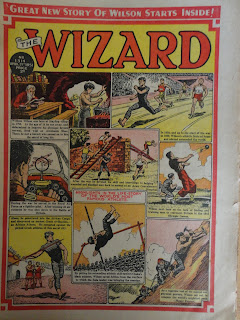 turned in the most amazing performances in both track and field-often well inside the world record and over a variety of distances. I tried to emulate his running style-a piston like arm action with his hands in a karate style; I also admired his long jump style-knees together, close to the chins and the arms straight out in front like a diver.

At various other times he was a Second World War pilot flying Spitfires and also batted and bowled for against . Oh, and by the way he also climbed Mount Everest too.

The author, WS Webb clearly knew about the sport and although the performances were incredible, they were also believable too-just within the bounds of the possible as athletes in more recent generations have shown. I also admired his lifestyle-an ascetic one which appealed to me. 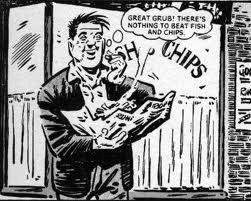 In some respects Alf Tupper was the opposite-Wilson wouldn't have come within a hundred yards of a fish supper, which was Alf's favourite meal. Facially, Alf Tupper looked a little like , but he was jovial with a ready smile rather than serious demeanour which Wilson always held. 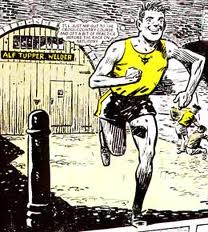 He had a more robust build than the lithe . Tupper's build could perhaps be described as burly. Alf was a working class man-a welder by trade who usually always had to work late on a Friday night and Saturday morning in his workshop under a railway bridge-not the best preparation for a Saturday afternoon athletics meeting at the White City in London against the toffs of the athletics world. This usually meant he had to dash to the track and field meeting arriving just in time in his working clothes much to the disdain of the upper class officials who looked down their noses at him. Sometimes he was stinking of fish and chips which Tony had usually thrust into his hands as Alf was dashing for the train-imagine running with a fish supper inside you! 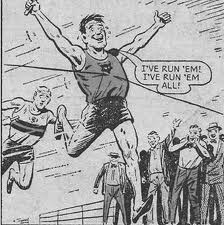 When racing against the toffs who were or or Yale chaps, there was always one of them who would try to win the race against Alf, by fair means or foul-usually the latter. They would spike poor Alf or barge him off the track, however this would only make Alf all the more determined inspiring a demon like burst where he would come from behind and ‘run ‘em’. It was all great stuff. The last box usually saw Alf coming out the chippy late in the evening enjoying his fish and extra chips as he headed back home to Greystoke's, a gritty northern town .

In a different way, Alf was equally inspiring too. Being working class, many readers thought Perhaps if Alf can do it, the so can I. The attraction and glamour of races in London appealed too as well as Alf's exploits in America-both indoors and outdoors.

Alf was mainly a miler, but he did run other events too; often he made up for any slight lack of talent and an apparent slight lack of speed, with an abundance of determination and guts-indeed I recall he once ran for in the Olympic Games whilst temporarily blind!

Where Wilson and Tupper were similar was in their desire to win, but in a fair way and also in their resilience-they both had that steely determination never to give in, which is an inner quality which most middle and long distance runners have. I well recall training with similar, admirable characters in real life with that inner steel and resilience such as sub four minute miler Adrian Weatherhead and David Moorcroft the former 5,000 metres world record holder.

Who will replace the inspirational, great role models from the comics of yesteryear for our children and young people today and tomorrow?


See below-a good Christmas present for some of us boys...hint, hint...! 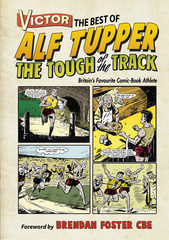