Running Away To Join The Circus!

In our class at Hunters Tryst Primary School there was a girl called Audrey Milne. She came from a good and well meaning family who stayed at Oxgangs Farm Loan. Audrey had several older brothers and a younger brother. I think they may have had their ups and downs as a family-their father possibly died when Audrey was quite young, although I may be wrong on this.

What was impressive was the way the family made a community contribution. Audrey's mother, Mrs Milne, was the Akela of the local Cub Pack which I attended each week-was it the Edinburgh & Craiglockhart 113th-but no, I've just been told (21st November, 2016) by John McDonaugh that it was the 105th and even better John's discovered from the mists of time an absolute treasure of a serendipitous find, a photograph of our cub scout pack from March 1966.

I only ever made the heady height of Seconder of a pack-Norman Stewart however was a Sixer, which meant he headed up a small group of six boys; I was therefore only the assistant to the Sixer. Clearly he had leadership skills I could only dream of-or perhaps he just behaved a lot better than me.

The Cubs were great fun and a few of us from The Stair attended for several years including Michael Hanlon and Iain Hoffmann.

Like most children and young people who attend youth clubs, sports clubs etc you never really give any thought, consideration or appreciation that Mrs Milne was giving up a significant chunk of her valuable time, not just to run the Cubs, but also the training and planning and organisation required too-it's perhaps a bit late in the day to thank her.

Some of the Cubs had an armful of badges-I'm afraid the only one I ever achieved was the Collectors' Badge. Collecting stamps did it for me. Earning the badge was quite rigorous-I had to travel down to a lady's house at Craighlockhart to be interviewed and asked some tough, probing questions.

Whilst I never got above assistant manager level at the Cubs or did well with the badges, I fared a lot more successfully at Bob-A-Job week-ironically the Cub and Scout movement fared less well! There was a prize for the Cub who collected the most money-one lad was absolutely amazing-completely out in front of the rest of us. I can't recall how many names and jobs that each card held recording jobs done, contributions made and signatures, but it was more than twenty-therefore at least a pound should be raised.

Greenbank was always a fertile ground for me-I had reasoned that few of the Hunters Tryst Cub Pack would venture that far and the residents were quite well off. What I hadn't considered was that I had probably strayed into the territory of a Greenbank/Morningside Club and Scout troop.

Once a job had been completed we issued a sticker to the household who would thereafter place it in their window-we weren't supposed to call at a house which had received a previous visit by a Cub, however I tended to feign ignorance. 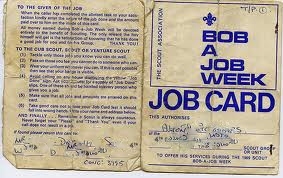 Anyway, covering Greenbank, I soon managed to complete a card. I proudly visited Mrs Milne to get a second card and enjoyed the praise which I received from her. I was doing well with the second card when the attraction of all those bobs grew too much for me-my blood sugars must have been too low, well that's my excuse! Anyway, I'm ashamed to say I spent a few bob and came up with a cock and bull story about losing the second card.

I had an opportunity to make amends, but I'm afraid Billy Smart got in the way. I had managed to win the Edinburgh Cubs 100 yards Championships for our troop-the event was held at Campbell Park, Colinton. I was thereafter selected to represent the Edinburgh team in the Scottish Cub Championships. However, my grandfather had received free tickets to see Billy Smart's Circus held at Murrayfield-it clashed with the other event. I let Mrs Milne down again and preferred to go the circus instead! 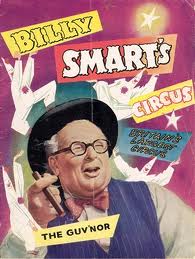