In Search Of Perfection

Of an evening, I would occasionally be asked to run a message for my parents and would have to go down to the shops at Colinton Mains. The distance from The Stair to this group of shops is a little bit under a quarter of a mile. I used to love to run all the way to Colinton Mains-there was something about that distance which really appealed to me.

I couldn't run flat out, otherwise I would slow down after sixty yards or so. Instead it was a long, controlled sprint, where I had to try to distribute my effort as evenly as possible. These runs involved a constant search for perfection-sometimes I marginally over-cooked the effort early on and sometimes I arrived at Andretties or RS McColl with something left in the tank. On several occasions there was a feeling of satisfaction-I had almost judged the run to perfection, but that didn't mean perfection-instead each new run was an opportunity to strive for that elusive, perfect run.

Although I would also run back home, it wasn't quite the same and was much more of an effort without the same sensation of power and speed, partly because it was slightly uphill and also because I hadn't completely recovered from the earlier effort. 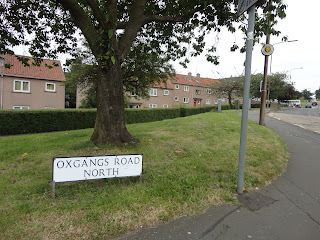 Once I had covered the initial seventy five yards or so at around 90% effort to the junction with Oxgangs Road North, I would take a sharp right angle and fly down the gentle slope past Oxgangs Police Station on the other side of the road, sweeping past our beloved telephone box-this section allowed me to build up a lot of speed, but using very little energy- it was effortless, especially if there was a slight tailwind behind me.

Just before The Store the road took a gentle sweep to the left-it was here that I would cross Oxgangs Road North to run the shortest distance by narrowing the angle. I also had to judge when it was safe to cross the road too-ideally the two objectives coincided-it was frustrating if that didn't happen and there was any delay. Thereafter the aim was to maintain the pace to the finish in as relaxed a manner as possible, so I floated along past the houses of Colinton Mains toward the finishing line which was always the zebra crossing with its flashing orange globes.

Running close to the boundary walls and hedges of the houses along Oxgangs Road North gave a very satisfying sensation of speed-I believe there's a psychological term for it; although this can also work the other way against the runner, if it's a fence with intermittent metal stakes giving an off-putting strobe effect.

Having undertaken the run in the four seasons of the year and at different times of the day, I had ascertained through trial and error that there was an optimum time to attempt the run of perfection. This was a late afternoon in late autumn, moving toward early evening. The clocks had changed, so it was getting dark. There would be a chill in the air, which added to the feeling of vitality and sensory sensation. It was in these moments I moved along at speed, feeling that I was only caressing the ground with the lightest of touches. I could feel the rush of cold air on my face and hair-just after four o'clock has been identified as a time of the day when your body is recognised as feeling at its best-this seemed to me too, that this was the best time of day for the run; and as I ran, it felt wonderful to be alive and young and fit and out running-it was the most magical sensation and I loved it.. I was so living in the moment-at that age I felt immortal with a wonderful sense of well-being and that I would always feel thus –young; strong; fit and healthy.

As I said I would always run home too, which was fine, but the second run was never ever the same-it was slightly uphill, usually against the wind, and there was a slight jadedness from the first effort-however, that didn't stop me giving it my best effort. I never timed myself, not that I had a stopwatch-whereas today I'm generally obsessed with the stopwatch-I couldn't possibly go out for a run, ahem, jog, without timing just how slow I am. Back then  it was all about feel, a marrying of the physical, the mental and the emotional combined with pace judgement and the chutzpah to push the limits in search of perfection and beauty.

Back then in the 1960s, the final triumph would be on arriving home. I would walk through the door of 6/2 and my mother Mrs Anne Hoffmann would say, You haven't been for the message already have you! Yes, the carrot's usually better than the stick!

Receiving praise and astonishment from the household, that I could have gone for a message in such a short period of time was of course satisfying, but the real satisfaction, which I never mentioned to anyone, was an innate one-it was the sheer joy which I got from trying to run like the wind and the search for the perfect run-The Stair to Colinton Mains-on a dark late autumn, early winter afternoon moving toward tea-time.

Almost half a century later I wonder if there are any kids from The Stairs out there today trying to do the same?
Posted by Peter Hoffmann at 27.11.12