My favourite and most visited local shop was Ewart's, the local newsagents.

The Ewart family ran the shop for decades.

Compared to the more risky nature of some of the other shops it was a sure fire business with no chance of failure.

From early in the morning until teatime, the shop was always busy.

It was the shop at The Broadway which, depending upon the time of day attracted working men; housewives; teenagers; and children, both boys and girls, so it had an all-round appeal.

I recall delivering Sunday newspapers for Ewart's, probably because it was my day off from Baird's Newsagents, Morningside Drive.

The shop always had a different feel to it on Sundays because it was the one day of the week that Ian Ewart (who ran the shop) took off.


I liked Ian - he was an absolutely lovely gem of a bloke - a legend in Oxgangs - he had a good heart and excellent customer care so his absence on a Sunday made a noticeable difference.

Other relatives came in to open the shop in the morning until it closed at Sunday lunchtime; possibly it was Ian's father. Indeed it was probably his father and mother who initially started the business in the early 1950s?

His mother (whose name appeared as the addressee, Mrs E. Ewart) appeared at various times during the week, but not so much in a serving capacity. She was a serious looking, older woman, who appeared very efficient and business like. Indeed, whenever I saw her she seemed to be undertaking book-keeping and other such tasks.

Perhaps because the shop proved to be so busy and lucrative and to allow them to expand at an early opportunity, Ewart's took on the let of the adjacent first shop on the precinct, 1 Oxgangs Broadway previously run by McNab's the Drycleaners. It thus became a double shop unit.

Some people may be surprised at what a good mark-up there is on newspapers.

When that is multiplied by hundreds of newspapers each day, seven days a week, fifty two weeks of the year, it really adds up. It was only after reading A Season In Dornoch by Lorne Rubenstein that I became aware of this. So the Ewart family made a very good living indeed; that said Ian Ewart in particular had to work hard and long hours. 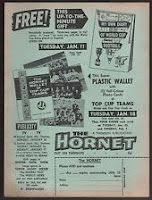 Because Ewart's sold comics the shop was a big attraction for me.

When there were free gifts in The Hornet I would set off early on a Monday morning to buy my copy.

I might arrive at the shop as early as seven o'clock.

As I neared the shop my little heart would race to find out if the comic had arrived or not.

Sometimes there was a delay.

As well as being very disappointing this was a great worry too, in case by the time I returned after school at Hunters Tryst that all the copies of the comic had been sold out and I would miss out on the free gift; I think Ian Ewart was probably bemused, but entertained by my angst and keen enthusiasm!

The free gifts were a simple and clever piece of marketing by DC Thomson - usually it was a plastic wallet with some football team photographs.

The shop also sold some toys which were displayed in the window.

We played a bagsy game.

Like something out of Dickens, a few of us would line up along the shop window front with our little noses pressed against the glass.

In turn we would bags the toy which we were going to get for our birthday or Christmas.

I don’t ever recall actually buying or getting a toy from Ewarts' and many of the boxes remained unchanged in the shop window for years. I guess it was an easy way of filling the large space for little work and imagination.

Whilst newspapers, magazines and comics were the main-stay of the business, tobacco and cigarettes would have come next in the pecking order.

In the 1960s a significant part of the adult population smoked and this figure would have been higher in Oxgangs which was predominately working class. Players No 6; Kensitas; Embassy Regal - all the common brands, but of course no Gauloises or Disque Bleu which my father smoked!

Most children and some adults bought sweets regularly and the shop sold hundreds of sweets and chocolates each and every day.

For the shop assistants, this must have been a tiresome business.

Within the shop one whole side was devoted to children’s confectionery.

There was a long glass counter.

The whole of the front cabinet was lined with jars of penny sweets which were what most of the children came in for.

The shop assistants had to bend over and stretch forward in an awkward position.

Many of the kids took an age to make up their mind to the tune of ‘Come on now!’

Just discovered your blog today, and have been engrossed for hours! I lived next door to Annie and Bob Ewart in Oxgangs Farm Drive. They owned the shop, and when they retired their son, Ian, took it over. Mrs Ewart always gave me the most wonderful sweetie presents - huge boxes of chocolates at Christmas, and giant eggs at Easter.

Mr McNish had the post office and his wife run the wool shop during the eighties. The wool shop was the third shop in, Ewarts being one and two. Opposite was the butchers Armstrongs. The fruit shop became a video rental shop. If I remember correctly, the wool shop eventually moved to the opposite corner before closing down, and it's original spot was taken by a beauticians, a theme which has stayed ever since. The store became Dennis's, he still runs it today. Hairdressers up top is still there. The chip shop was owned by Carmen, and was family run until he passed away and his youngest son kinda made a mess of the business. Not seen a mention of The Vintry, the off licence that was part of the Good Companions, that finally closed in the late eighties(I think Dennis was taking too much business). Just some of the stuff I remember that may help, although more recent.