Hit or a Miss? 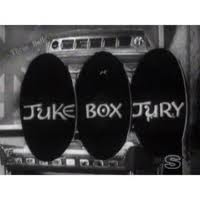 Saturday teatimes were comfortable occasions for a good chunk of the 1960s with Juke Box Jury on BBC television. The programme was simple, yet clever in the way that it appealed to family audiences.

Because there were so many young families in the 1960s compared to later generations when many women put off having children until they were into their thirties, there was less differentiation in musical tastes. It was quite likely that mums and dads enjoyed the same music as their children. I remember Iain Hoffmann doing his Mick Jagger impersonation whenever The Rolling Stones were on, to the delight of his mother, Mrs Anne Hoffmann. 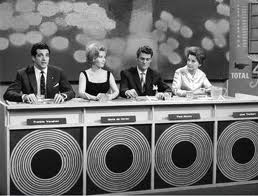 Apart from shared musical tastes, there was always the tantalising moment, if the record had been voted a miss and the hooter was sounded-much more fun than the boring ring of a bell for a hit. Each of the four guests only had a minute or so to give a quick critique of the record-not much time and many of the guests didn't mess about or come out with qualified views or vacuous comments-instead they nailed their colours to the mast. What was always a bit fun were the surprise guests-usually a group whose record was being reviewed-the camera would pan across their faces, before they emerged to meet the suitably embarrassed panel. 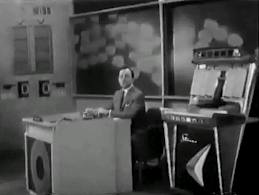 The great David Jacobs presented the programme. In later years I've enjoyed listening to his Sunday night late show where he has impeccable taste in music-he's still going strong a eighty six -the man's more than an institution-he's a HIT!
Posted by Peter Hoffmann at 21.11.12