Let It Be Robbs' Electrical and Radio Shop, Morningside 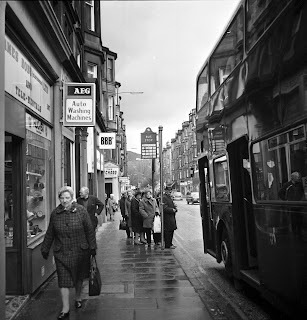 One particular shop that a few of us from The Stair used to frequent back in the 1960's was Robbs' Electrical and Radio Shop at Morningside Road. Douglas Blades could write a better and more knowledgeable article on Robbs than me - it was here that he used to buy his large collection of American records and have cognoscenti discussions with the staff - he was far in advance of most of us, albeit older.

The main reason for my visits was to buy a Top Twenty record single, but occasionally it was to buy an item which was quite new to me - it was called a stylus. When I think how switched on kids are today re: computers, iPhones, et al I have to smile at my innocence.

Our first record player at 6/2 Oxgangs Avenue was a portable record player that when it was packed away looked like a small suitcase. It was daft really, because in most households it was set up permanently, however if you chose to close it down after play, particularly if there was little space in your bedroom, it was useful and compact. I guess the concept behind it was that you could take it with you to visit friends to play records together.

I got my first one from The Club. It was a very happy day when it arrived - at that moment 20 weeks of payments weren't a concern; and after all I had my paper money from Baird's Newsagent's  for delivering morning papers as well as The Edinburgh Evening News in the afternoons.

My first introduction to the intricacies of the stylus was when something went wrong - the record wasn't playing properly.
'Have you tried out the stylus, Peter?'
'The what?'
'The stylus - the needle - you'll find it located under the arm - it comes out! You'll get one at Robbs - Neep!'

I seem to recall the styluses came in different sizes and brands, because I had to return the first one I bought - initially it was a little tricky to fit, but once I had done it I felt quite proud of myself - like a proper technician - a real man!

The first record that I bought was in 1967 was Scott Mackenzie's San Francisco'. It remains a haunting track taking people back in time. Another record I bought was Peter Sarstedt's  Frozen Orange Juice which I remember playing relentlessly on a jukebox in a cafe in Grantown-on-Spey on a holiday with my grandparents. 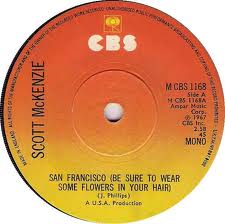 During the late spring of 1969 we'd been visiting my father who had hospitalised himself for another six week spell at the Andrew Duncan Clinic to try to get himself back on the wagon after he'd been on a bender. Visiting him was difficult, but we were supportive, particularly my mother.
Those daily visits were made easier by playing table tennis in the hospital's games room - it was great fun to do something as a family - it was something which we could all join in and participate as a family - good competition and several laughs - but wasn't it incredibly ironic that it took such a visitation to such a place to facilitate such a rare happening! 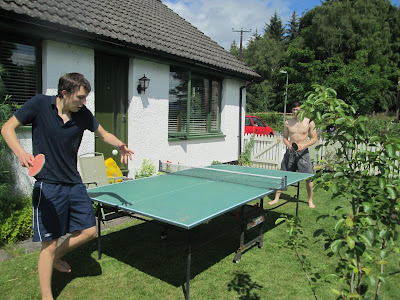 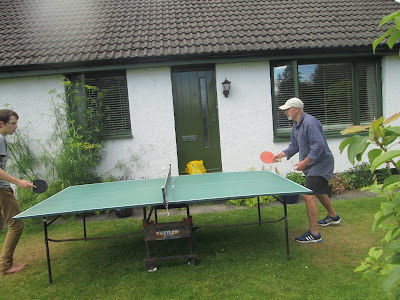 Will on the ropes! from Paw!

I've never thought about that irony until typing this blog. Over a decade ago I bought a table tennis table and we all play out in the garden from the spring through to the autumn - even the non-sporty Alison and 'Unc' Iain Hoffmann on his regular visitations! It's given much fun over the years and the occasional argument!
On reflection was there something in my subconscious - was the decision less about free will?

After Mother, Anne Hoffmann Jr and Iain Hoffmann and I visited the hospital we used to stand outside Robbs' Electrical Shop awaiting the dear old Number 16 Bus to take us home.
I'd enjoy looking in Robbs' window at all their goods.
And it was on the way down for such a hospital visitation that I had nipped in to Robbs' to buy Get Back by The Beatles. Their record label featuring a large apple was good enough to eat - the novel design captured my imagination. 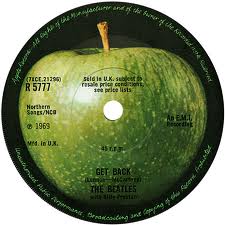 Let It Be by The Beatles must have been on the go around this time too.
Leaving the hospital was always bitter-sweet.
As a boy a part of me was glad to get away from the hospital and the people in there and also from my father, but I also felt very guilty too and a sorrowfulness descended as we strolled along Miller Crescent, turning to wave to my father as he receded into the background.

Sorry Peter, I think your memory has let you down. It wasn't Scott Mackenzie who sang -Frozen Orange Juice- but Peter Sarstedt of -Where do you go to my Lovely- fame. I remember both vividly myself and wtih fondness especially as Scott Mackenzie died fairly recently. Strangely the first record that I bought was by an Australian band -The Easybeats- Friday on my mind.
Memory slips apart you're doing a fabulous job ':)

My own father spent periods in the Andrew Duncan although I'm not sure that his were voluntary. I wonder if Charles and Ken were ever there at the same time and shared therapy sessions. Now there's a thought:0
Nice to hear that you visited Ken as a family, in support. Well done Anne Snr. I assume that my mother visited Charles but we were not included in such visits or informed. In our family alcoholism was the secret curse. It was the elephant in the room that was off limits for discussion. We used to play a game -hunt the bottle- a search and destroy mission, as if that would do the trick! The naivity. Strange thing was that we did not witness my father drinking. I remember Mr Hogg having the odd beer and being apalled that he could be so blatant about it all. Again the naivity. My father drank in secret of course because there was so much fuss otherwise. He could conceal the drinking but not the effects. Helen could detect the drunk at 50 paces! He could drown his sorrows and our finances at the Good Companions but he could not avoid coming home to the repercussions of his behaviour.

Aye, wrong again-thanks Liz! Funny how I made that conflation-just as well I was not on a game show and that was the big money question! I will update later once viewers have followed post and comments. The group and track must have passed me by-at least in my memory. I checked them out on YouTube performing the track in Germany(?)-they were excellent-ahead of their time in some ways-lead singer is doppelgänger of Davey Jones of The Monkees-he looks quite street-wise and confident-with some of the cheekiness of John Lennon-their outfits are surely influenced by The Beatles but with their own twist or should that be stripe? It is good to see that at least my memory of your good taste is okay. I recall how the the walls of the bedroom which you shared with Fiona was covered with pull-out pictures from pop magazines-what magazines did you subscribe too? I used to think how cool the room was and that you guys were so much more advanced culturally than I was-of course in moving to Oz you will have regressed dreadfully!!! Who mainly featured for you all back then-was it the likes of The Monkees or David Cassidy?

You could be qualified to get a Apple iPhone 7.