In earlier blogs I've commented on the relationship that many families within The Stair had with the various Pedlars, Hawkers and Salesmen who visited regularly.The opposite of a relationship in the exchange of goods and services is a transaction.

It's an interesting concept particularly when looking at social change over the decades. In the past we had a relationship with the grocer; the doctor; the bank manager-today it's been replaced by a transaction at Tesco's; the health centre; or by telephone banking.

The upside, in our busy lives, is that we are able to speed through the checkout, without having to bring the person at the checkout up to speed on news about the family. The downside comes when one visits the health centre- it's a different doctor, who doesn't know you and who always has to check your notes on the computer screen.

Surprisingly, one vendor who we had no relationship with, was the milkman-no joke intended! The Hoffmanns got their milk delivery from St Cuthbert's Co-operative. A few other families in The Stair were the same-The Swansons were one such family, but the majority of families had other arrangements.

The reason why we didn't have a relationship was partly because of the incredibly early time in the morning at which the milk was delivered-was it around 2.00 am? Indeed the milkman was almost a ghostly presence, with the milk appearing like magic-one would open the door in the morning to bring it in for our cornflakes and there was our three bottles of milk standing erect like soldiers or bowling pins.

However the main reason why we had no relationship with the milkman was because of the interesting system which St Cuthbert's Co-operative operated. There was no billing or weekly money collections by the milkman so he didn't arrive at your doorstep on a Friday evening, which was how Edinburgh & Dumfrieshire operated. Instead a token system was used. whereby milk tokens were left inside the empty bottles which were left out for return. It must have been messy for the milkman and milk-boy-our empties were always very clean, but along with the tokens there must have been a mix of water and even milk on their hands. Saturdays with a double delivery would have been very tiring. 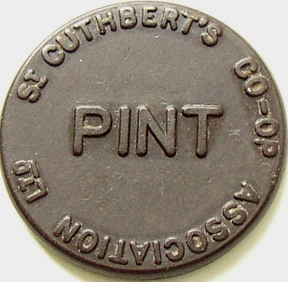 The tokens were purchased each week at The Store at Oxgangs Drive North. There was a separate section in The Store where ladies sat behind glass panels-a bit similar to the old banks-and distributed the tokens-for us it would be twenty one tokens. I can still recall the face of a woman with dark hair and glasses who worked there for decades-I wonder if she was a spinster who had to look after herself?

There were black tokens for when the milk price had risen and red tokens for normal use; there was also half pint tokens too, which was a nice touch if one were an old aged pensioner living alone-something which the supermarket giants wouldn't dream of running today! 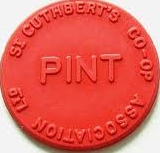 The price of milk evidently often went down in the summer and back up in the winter. If customers were not informed it meant they could be spending an extra penny a pint, which over a period of time could mount up, for hard pressed families. Although one could see the Co-op's logic, surely like today's 1st class postage stamps, would it not have been easier just to have operated a single token?

Probably because Oxgangs was such an outlying area, we never enjoyed the pleasure of having our milk delivered by horse-drawn cart the way it was in the centre of town at Marchmont, Tollcross or Stockbridge. Instead it was always a lorry which delivered the milk. As many people are aware Sean Connery was the Co-op's most famous milk-boy and he loved the horses. He worked for St Cuthbert's for many years. Indeed his employee records turned up recently from the archives and were displayed at the National Library at George IV Bridge.


A horse!, a horse, my kingdom for a horse! Aye if only we'd had our milk delivered by horse and cart, we'd have had a relationship with oor milkman, rather than a transaction!

MMM yes it could be Gail terrible when you cannot even recognise your own kith and kin!

Too many memories piling up here Peter,

I liked the St Cuthberts story. We had our milk delivered by the Dummie that is the Edinburgh and Dumfrieshire Dairy Company who used the three wheel battery power milk floats and who had a chain of small shops scattered around the city. My mother wouldn't buy St Cuthberts milk. She felt it was watered down and referred to it scathingly as "store water" although we did eventually pay for a share at the Co and got our St Cuthbert's number - 106748 - strange the things you can remember.

The large hardware store in the corner at Oxgangs Crescent was run by the father of Donald Frances who was in my year at Boroughmuir.

...............and don't get me started on Gerry Anderson. I followed all the puppet shows through from Four Feather Falls to Joe 90 but we never got the later half series The Secret Service. Lew Grade cancelled the series half way through but it was only shown on Southern Television in the UK. I have it on video. There is one episode of Fireball XL5 which has been coloured recently and issued on Blue-Ray. Quality is superb. Also has a long documentary about the making of the series. Worth adding to your Christmas list! I have vague memories of the two earlier series Twizell and Torchy the Battery Boy. I have a Torchy DVD set and my youngest daughter believe it or not would ask to see it when she was a toddler and that's only seven to eight years ago!

We got our first TV in 1959 I think. I remember being called up on a Friday evening with "Come and see what we've got" shouted out of the kitchen window by my mother and ran upstairs to see Michael Miles presenting Take Your Pick in glorious 405 line black and white.

In later years in the seventies when we progressed to colour my dad would leave the TV on even when there was nothing on but the test card and so some of that music played with the test card is imprinted in my memory. I bought a CD of the most popular pieces a few years back and surprisingly recognised a few of them. I sometimes think TV was better when they didn't have to try and fill the screens 24 hours a day.

But for old children's programmes have you ever visited

Keep up the good work.

Nostalgia is what it used to be!!!

106287-for those in the know, one can have fun in company with these numbers as a clever party piece. Funny I used to think Co-op milk was too rich, especially in the summer when we had to keep it in a bucket of ever changing cold water-today I drink skimmed, but perversely combine that with cream with my porridge! When I fancied a break from Bairds I used to join Geoff Hunter working Morningside/Comiston on the Dummy-will include the adventures in a future blog. Had forgotten Kennerty-one at top of Durham Road (grandparents) where I first tasted a very strange new product-yoghurt! Thanks Douglas, useful information on hardware store-I wonder if the Edinburgh Corporation initially dictated the type of business at the Crescent and Broadway? Any information on working at Allans at all? Thanks for link-one or two of the telly programmes are too far back even for me! I've already enjoyed a condensed Dixon of Dock Green!