There were four boys from the local stairs who had the radically innovative Raleigh Chopper bicycles. The boys were all the same age and in the same class at Hunters Tryst Primary School - Les and Derek Ramage; Ali Douglas; and Iain Hoffmann. Les, Derek and Ali all got their bikes first - Iain got his on Saturday, 8 May, 1971. Les and Derek had a red one and a blue one, Iain's was yellow. 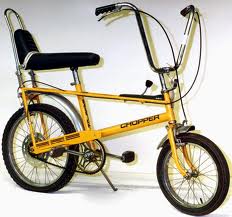 The Choppers were a wonderful design and exuded coolness. They were so different and so ahead of their time that they made an enormous cultural impact. In the UK we hadn't seen anything like them - it was a radical change of direction. That said I may have seen something broadly similar in American comics.

Whilst they looked fantastic ironically they were useless for cycling - they were fine to go around the four blocks or for a short spin to the shops - indeed one revelled in looking cool if one was spotted on it by other boys-but even better if it was by girls! It encouraged backies because of the length of the seat, but the bike was awkward to ride.


The anticipation of getting the bike however had been immense. After Les, Derek and Ali had got their Choppers I felt sorry for Iain. Because of the various jobs which I had I'd saved up a bit of money and was able to put down a sizeable deposit - the bike cost £36 with credit, but I had to persuade my mother Mrs Anne Hoffmann to act as the guarantor; thereafter I had to pay the remainder over a period of months.

The design mitigated against the bike being useful for rides to say Morningside or beyond. It was slow, heavy and had wide tyres. The high handlebars were based on the motorbikes which the Hell's Angels rode. It meant however that one couldn't get any real leverage or power when it was needed. For example when I first collected Iain's bike I cycled it home from Dalry - I noted in my diary 'Cycled all the way up from Dalry-Craiglockhart Hill was a killer...' I was clearly breathing out my arse. It was a rude awakening or wake up call to the design flaws of the bike.

i remember the chopper with great affection,had some great times with it.of course if it wasnt for peter iwould probably be running about on a soap cart. peter and me were unclear what happened to them in later years.probably sold for peanuts,scrapped or taken away by the repo man for not keeping up the payments. i wondered why i could never get a morgage,and the dirty looks from the bank manager over the years,ha ha.when i look back i remember a girl in my school class maggie campbell who was one of the first to get a chopper she was lucky,she didnt have to keep up any payments as she won it in a kellogs competion. great memories. happy daze.