'You'll Take What You Get!'

On a blog a few days ago on Ewarts Newsagents I mentioned the sweet jars which were set up along one counter of the shop behind glass. For small children this of course was at a perfect marketing height-eye level. For many of us we were in there very regularly for our treats.

In the mid 1960s as I got toward the age of nine or ten, if my father was working and we had been given school dinner money we sometimes just held on to the money and bought our lunches at Oxgangs Broadway. For me, lunch would consist of three Paris buns for nine old pennies with a bottle of Koolapop-a cola drink, which also cost nine pence-a grand total of one and six i.e. one shilling and six pennies. However, on returning the Koolapop bottle I would get threepence back which would go on a little mixture of sweets.

I’d usually go for sports mixtures-little fruit gums which were very hard and which took a lot of sucking and chewing. They took the form of sports kit-little boots or racquets. Green or red were the best flavour-orange was fine, but black was unpalatable to all but a few; on placing the order I would ask the shop assistant for no black ones. Sometimes they would oblige, on other occasions they would say Ye'll take what you get son! After all they could hardly do this for all customers and be left with a jar of black sports mixtures! 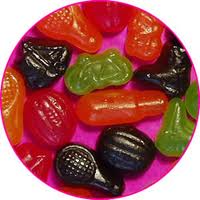 Because the sweets were bought towards the end of the lunch period and also to improve the quality of the school afternoon we would run the risk of eating surreptitiously in class. This was high risk-if you were caught, which was often the case, you had to spit the offending morsel out in to a basket, but more worryingly you might have to hand over the offending sweet bag to the teacher. 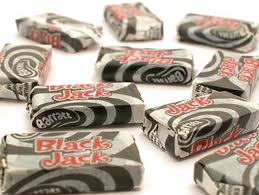 Other sweets which were popular with us all from the Ewarts sweet jars particularly for chewing in class were Fruit Salad and Blackjacks. Because lunchtimes were busy and some kids could be very slow in making up their mind and the shop assistants patience low, the lunchtime theme tune for Ewarts could have been Come on, make up your mind! I was never like that. I knew exactly what I wanted. However, there was such a bewildering range of sweets to choose from, perhaps it was understandable. In Sunday's blog in a quick Cooke's Tour I'll tackle the impossibly large topic of the bewildering range of sweets that were available.