No Copper, No Telephone

I was going to begin this blog by saying that throughout the 1960s no family at The Stair had a telephone, but then I recalled there was one family-the Stewarts at 6/3 Oxgangs Avenue.

Today, there can hardly be a household in Oxgangs which doesn't have a land-line or a mobile phone.

However, in the 1960s, phones were almost as scarce as hens' teeth. 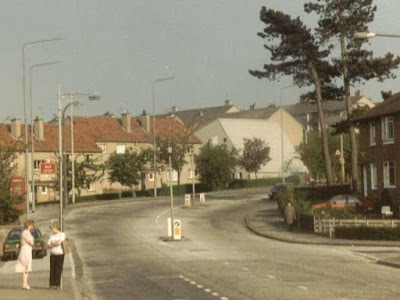 For telephone calls like the other families in The Stair we were dependent on using the phone box at Oxgangs Road North sited between the pensioners' flats and Oxgangs Police Station.

The phone operated the old A and B system.

You inserted four 'coppers' - 4d in old money - approximately 2p in new money. The number was then dialled. You literally dialled the number which was cumbersome, but oddly satisfying. There was a ten hole dial and to connect to a number within Edinburgh you would dial seven times by inserting your index finger into the appropriate ring.

Our most regular call was to my grandparents' house who had a telephone.

Initially, the first three letters of the recipient's location was called.

Because they stayed in Portobello, we dialled POR followed by their number, 4260.

In later years it changed to just numbers, so each area of Edinburgh had a three number code; so my grandparents' number became 669-4260. 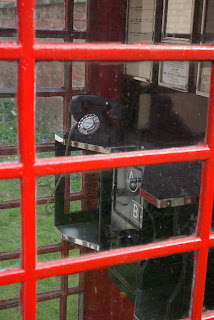 As each letter or number was dialled the mechanism made a satisfying slow, clicking sound.

Once the last number was dialled you waited to see if the phone was answered and if it was you had to depress the heavily sprung A button and you were then connected.

If the number called wasn't answered at the other end you depressed the B button and the 4d was returned.

As children we never passed the phone box without nipping in to depress the B button just in case someone had forgotten to do so. Once in a blue moon, we were lucky - literally and metaphorically, a sweet moment!

If phone boxes could speak the Oxgangs Road North box could have told a thousand and one tales.

And because phone calls at that time were rarely mundane, the calls were happy or sad; joyful or tragic; optimistic or depressing; hard or easy; cruel or kind; heavy or light; long or short; clever or stupid; despairing or hopeful. They witnessed the human condition. And whilst the dialling system was satisfying that was only if you weren't in a rush - it was infuriatingly slow if you were in a hurry.

Phone calls to my grandparents might have been as simple as making travel or visitation arrangements, but sometimes could be if things weren't right at home; on more than one occasion I was sent by my mother Mrs Anne Hoffmann because my father's behaviour was causing concern and we needed some support.

The main reason for not having a telephone for the families at The Stair was cost.

Looking back it was a distinctive way at the time of delineating social class. Those from the middle class and upper middle class will have had telephones in their homes whilst those from the working class didn't.

As mentioned the exception were the Stewarts and I suspect this must have been because Mr Stewart was a 'copper'. The police must have paid for a phone to be installed in case Mr Stewart ever needed to be called out urgently.

The worst incident of not having access to a telephone was on New Year's Day, 1979.

Whilst Christmas Day was always celebrated at my grandparents' house, New Year's Day was held at 6/2.

My grandfather had died in the early hours of that New Year's morning.

I arrived at the front door with my grandmother and Aunt Heather.

We would normally have been welcomed by my mother and her husband John Duncan.

Instead I had to break the terrible news to my mother that her father had died.

There had been no telephone to communicate the bad news earlier.

And, there are really no words to describe that moment when we arrived on that New Year's Day at 6/2 Oxgangs Avenue.
Posted by Peter Hoffmann at 16.11.12