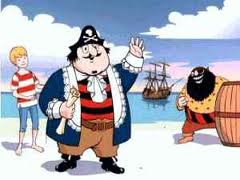 Sunday teatimes in winter were spent at our grandparents house at Durham Road, Portobello. These were a mix of sweet and sour occasions. Sweet because it was very comforting sitting within the bosom of the family by a glowing coal fire, with a lovely tea on the table . But sour, because as soon as either Noggin of the Noggs or Captain Pugwash finished, we would head out into the winter night to be driven home by our grandfather to Oxgangs and The Stair. Back at 6/2 the house was cold-the fire wouldn't be put on at that time of night and we couldn't justify putting it on, so we cowered instead around the small two bar heater. At least there was a hot water bottle to look forward to, placed in one's bed.

Captain Pugwash and The Black Pig often followed the Dickens serial. Whilst it didn't have the same mystique of Noggin, it did have that something extra. It somehow married the feeling of the 17th and 18th centuries with a hint of modernity from Tom the Cabin-Boy. The programme ran until 1966 when I was ten. Similar to Noggin, I think the black and white version of the early shows works best. And like much of the best television of the time, it had an excellent theme tune called the The Trumpet Hornpipe-jaunty music-a sea shanty on the squeeze box. 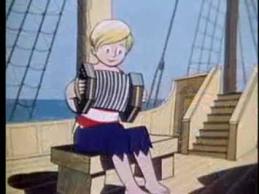 Like many of us, Captain Pugwash, despite his bravado was a bit of a coward-usually it was the likeable and resourceful Tom who saved the day.
Posted by Peter Hoffmann at 25.11.12