Today, the 29th November and tomorrow, the 30th November-St Andrew's Day-Scotland's patron saint are the birthdays of two individuals who have featured regularly in The Stair-Iain Hoffmann (6/2) and Ali Douglas (8/3). Both these lads were probably the nicest boys of us all so it was rather appropriate that they were best friends for the whole of primary school. 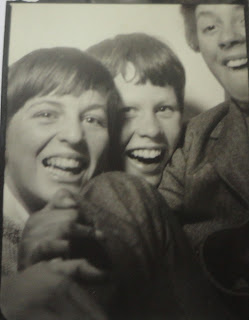 Few of the kids in Oxgangs had large birthday parties during the 1960s-partly this was because of cost, partly because of the culture. In later decades it became a growth industry-I've lost count of the different types that my own children enjoyed from trampolines to cars to sleepovers to the cinema to the Aquadome etc. I only recall attending a single party-at Joyce Colbron's who lived at Oxgangs Farm Drive-it was a rather lovely party, beautifully organised by her mum from arriving with a small present-a box of Maltesers, followed by all the traditional games-Blind Man's Buff, Hang The Tail On The Donkey, Musical Chairs-of course I couldn't prevent my competitive side showing through in this game-all nicely rounded off with ice cream and jelly and a birthday cake. 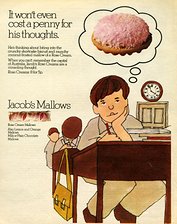 For many years Anne Hoffmann Junior; Iain; and I were allowed to invite one friend in for each of our birthday teas-Ali Douglas appeared regularly. These were simple affairs, but never-the-less really good fun. Because we lived quite simply having a mix of egg 'n cress and ham and tomato sandwiches, followed by Cadbury's Chocolate Fingers; Jacobs Marshmallow Coconut Biscuits; Tunnocks' Chocolate Teacakes-all great luxuries-items which never featured in the household meant these occasions were all great treats. The piece de resistance however was the birthday cake-the chocolate cake so lovingly baked by our grandmother which was absolutely scrumptious-it was a recipe which had been kept in the family for generations.

If you're reading this boys, Happy Birthday to you both!

thanks pete great feelings come back on our birthdays,wish we could travel back for a day like captain kirk in star trek,i remember ali douglas with great fondness,and to think his birthday the 30th st andrews day is the same as my oldest grandaughter brookes. happy birtday.