The second of the three books which made a significant impact on me when I was young was The Water Babies by Charles Kingsley. 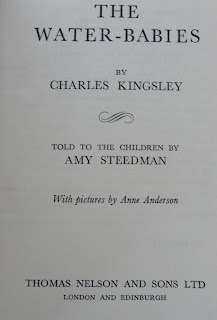 We had a little copy of it in the bookshelf in the sitting room at 6/2. I must have accidentally strayed across it before I'd gone to Hunters Tryst and been fascinated by this very strange story. The illustrations by Anne Anderson only added to this odd, but very beautiful little book from the Nelson Press. 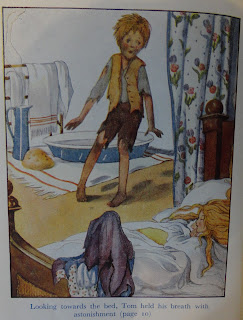 It was very much an adult book section and this little oddity was the only book there which could be of any interest to a child. Also, because the book section was high up on the top two shelves and full of books, including heavy university tomes, it wasn't an area of the house that I rarely ventured near. Although the shelves weren't very large, there was considerable depth to them. This meant the rows on each shelf were at least three books thick, with further books added horizontally. If one were ever trying to find a book that was buried deep in there, it was challenging and cumbersome to reach it-particularly as many of the books were large, heavy hardbacks. The book must have been at the front and then slowly disappeared deep into the library. 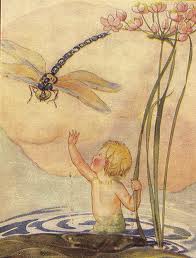 Anyway, after a few years I had forgotten all about it. But something, must have given me a prompt-school perhaps-which made me go in search of it again when I was a little older. Initially I couldn't find it-part of me was wondering whether I'd imagined the book, but it had made such a deep impact on the recesses of my mind, that I was determined to search it down. Looking back, it was rather like finding one-self a character in Carlos Luis Zafon's fabulous and mysterious book The Shadow of the Wind. 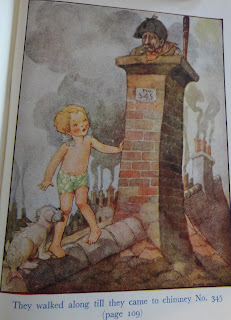 The story is a morality and redemption tale which was over my head, but what was happening to poor Tom the Chimney Sweep, both at the hands of his master, Grimes, and landing in some very exposed situations, literally and metaphorically, completely spooked me. And, what indeed about such characters as Mrs Be-done-by-as-you-did! 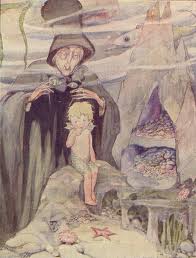 Although I've a copy at home, I'm reluctant to go beyond the illustrations!

Well spotted Ruth-cardinal sin of basing it on my own age-circa 1968? Thanks!