Not Swimming, But Learning!

One possible divide in The Stair was the children who regularly went to Warrender Swimming Baths and those who didn't. There may have been a cost dimension for some of the children, but generally many of the children managed to get the bus fares and entrance money, if not money for secondary spend.

I cannot ever recall seeing Heather or Gavin Swanson ever going to the baths. Even if they had the inclination to go they never seemed to have the freedom that all the other children enjoyed once they got to a certain age-the interesting dynamic of control was clearly a factor there which as a parent I can now understand. Looking back, for many of us, being able to go swimming without parental supervision was a right of passage. It was another example of the inordinate freedom to roam, that certainly The Hoffmanns were able to enjoy. Because our father would have done the same at the Glenogle Baths at Stockbridge as a boy in the late 1920s/early 1930s, it probably wasn't considered a health & safety issue in our house.

I don't remember seeing The Hogg girls Christina, Maureen or Eileen going along; similarly The Blades and The Duffys. Generally speaking there seemed to be a gender split, because the children who attended regularly were boys-The Hanlons-Michael; Boo-Boo; Colin; and Alan; and Iain and Peter Hoffmann, as well as Ali Douglas (8/3); Les and Derek Ramage (4/3) and many others. 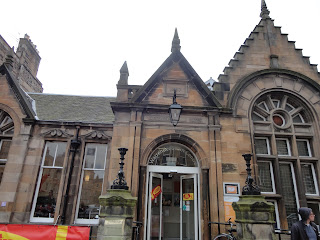 Iain and Boo-Boo were great pals and for several years they used to go along together weekly It was the one activity that Ken Hoffmann used to very occasionally come along with us. He was an excellent swimmer, with an effortless, smooth and powerful front crawl; but it was his diving which attracted great attention. Because the deep end was only six feet deep, unfortunately, all that Warrender Baths had back in the 1960s was a small spring-board-but even from this he performed lovely swallow dives. I enjoyed watching him perform these. What I didn't enjoy was when he might swim under water and suddenly take my legs from me and pull me under the water. I couldn't swim at that stage so it was always a scary experience.


One distinctive memory for me about how life might have been, was when he had the loan of a black Riley car. It must have been during the autumn school holidays-the tattie holidays. It was a wet, overcast Friday. Over lunch he announced that the three of us-Anne, Iain and I would go swimming at Warrender Baths. It was a great feeling to be driven in luxury, rather than queueing for buses and then walking to and from Bruntsfield Place to Thirlestane Road in the rain. We were driven straight to the door! Even the route he took seemed to be magical-through the Braids, Cluny, Blackford and then Marchmont. And the luxury of a chilly bite and then chauffeur driven home!

We usually always treated ourselves to a chilly bite after our swim-it was a hot chocolate drink from a machine which cost sixpence. We really did shiver after our swims so it was welcoming initially, but I usually found it a bit sickly toward the bottom of the plastic carton. There was a rather classy shop with a a lime green painted façade (probably Farrow and Ball paint!) called Elizabeth's at the top of Thirlestane Road from which I'm ashamed to say we used to nick sweets from-perhaps because she was used to a better class of clientèle it was as easy as stealing sweets from a baby.

Edinburgh Corporation were very go ahead with their swim lessons programme which were usually held during the school holidays. For this one would usually be issued with a swim pass on the last day of term dated for say the two weeks of the Easter Holidays which gave one free access to the baths. It was on one of these occasions at Bruntsfield Primary School (Sean Connery's old school) where they had a pool in the basement, that I first learned to swim-what a feeling! The instructor obviously realised I'd mastered the stroke, but didn't have the confidence. He gave me water wings to put on for confidence-what I hadn't realised was there was no air in the wings-bright or what? 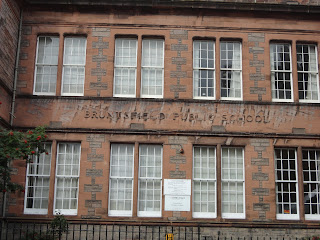 After that one was able to make progress through their swim development programme-a lovely certificate for swimming a length-thereafter it got progressively more difficult, but because the certificates were so classy, one wanted to get better to obtain them-back to my collector tendencies! Anyway, I managed to get certificates 1, 2 and 3, but never sat no 4 which included life-saving at a higher standard than level 3. Part of some of the tests included diving for the heavy rubber brick. 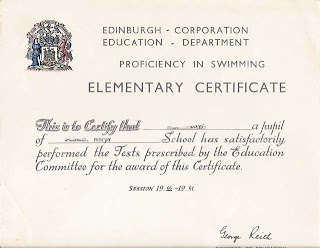 Hello Peter
I remember regularly going to warrender on a Saturday morning but you had probably already moved on to other pursuits by then. We never did get lessons but remember teaching myself with armbands. I could probably do with some technique lessons and will get around to it one of these days
Ruth

Teaching yourself to swim-very impressive-RESPECT!Did you attend with anyone else from The Stair?

Think I remember going with Eileen,Alison,Gail,Colin,Alan and Esther there was usually a crowd of us like you I remember the hot chocolate and being freezing coming out with wet hair but loved it