I Love Paris In The Springtime

Out-with Ewarts the Newsagents, the most frequent shop that I visited at The Broadway was Martins the Bakers. Similar to Ewarts, it was the one other shop that opened early in the morning. There was always someone in at the butcher's shop, but I don't think it opened until a little while later.

On occasion I would go into the shop twice in a day. The shop had a distinctively different feel to it depending on whether you were in early in the morning or at lunchtime. I associate morning visits with dark autumnal or winter mornings when I was sent from the age of five or so to buy a sliced plain loaf for our breakfast. It was always a grand feeling going into the warmth of the shop when all the smells of the freshly baked bread, buns, scones and cakes were in the air. First thing in the morning, the staff reacted to you differently too-it was a more low key and gentle approach-more of a relationship than a transaction. 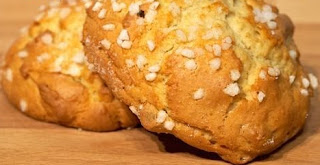 Lunchtime visits were when we gave school lunches a body swerve, so Martins was always our first port of call. By this stage in the day things were more frenetic and much busier with other customers in the shop. The aroma and the warmth and cosiness of the morning had evaporated. When I purchased my three Paris Buns it was a transaction as the lady behind the counter moved on swiftly to the next customer.

Martins the Bakers seemed to have such a strong foothold in Edinburgh that I wonder whatever happened to the company?  There was one at the Colinton Mains shops and on a Saturday morning I used to finish off my paper run with a visit to the Morningside Drive branch for rolls, and coconut snowball bun. There was a branch at Bruntsfield, where I purchased a couple of fresh cream chocolate cakes each school lunchtime at Boroughmuir Secondary School. Gosh, what rubbish I used to eat!

I assume Martins the Bakers shops must have been bought over like other such companies already mentioned in the blog such as the Edinburgh & Dumfriesshire Dairies.